Anne has starred again whilst doing research for a long time on the womens cricket side of the town. How fitting that it’s now ready the week after the Womens World Cup Triumph and we will be posting articles over the next few days on the topic.

In their Centenary Brochure of 1934, Burnley Cricket Club refer to having hosted a Ladies match on 18th and 19th July 1890.  Gate receipts over the two days were a very considerable  £200 but after expenses profit was a measly  £37.  The reason for this was that these  were  two  professional Ladies’ Teams, the Original English Lady cricketers.  In 1890 two teams were raised by the English Cricket and Athletic Association from ladies of Surrey, Kent and Middlesex, to tour the country playing matches either between themselves, as was the case in Burnley, or against amateur sides.  The ladies were coached by county players, were accompanied by a matron chaperone, and were not allowed to use their own names,  possibly for reasons of family reputation.

Their first game in Liverpool saw a crowd of 15,000 attend, with the Liverpool Post observing “they came to scoff but stayed to praise”. After two years, in somewhat mysterious circumstances and amidst claims that the (male) organisers had run off with the money, the side disbanded.

The two day game in Burnley was reported in great detail in the Burnley Express.  Burnley had seen some visiting teams before, such as the Australians, when local cricketer Fred Branch disposed of “the great Murdoch first ball, causing the captain of the Antipodeans so much mortification he straightway posted off to the Metropolis where he remained until his vexation had passed away,” but never a team of “those dear little creatures whose sylph like forms mankind so admires” and a great deal more in the same vein.

The question of what the ladies would wear had apparently been a hot topic but anyone who went to Turf Moor expecting “any outrage on propriety were agreeably surprised with the really attractive appearance of the ladies on the field”. 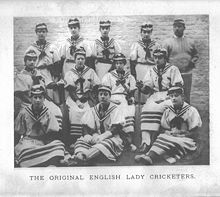 They were judged to play “very fairly though some of their attempts at throwing are decidedly feminine. “ The captains were very indignant at the suggestion that some lady cricketers wear aprons to catch the ball with.  The ladies were judged “to look healthy and strong and their appearance does not indicate that cricketing is so injurious to the female system as the Lancet would have us believe.” The full article is very lengthy but a fine example of its kind, and if anyone would like to read it, please get in touch.