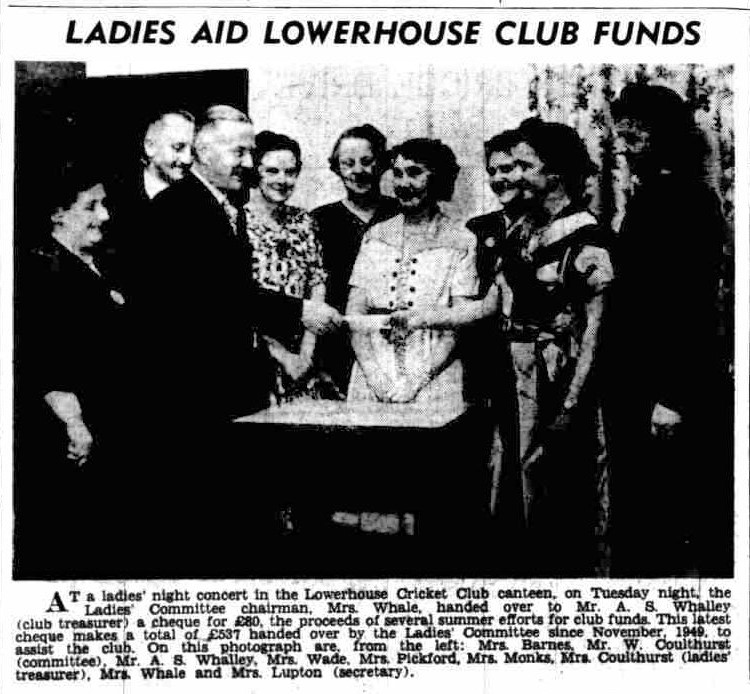 When the bar reopens in its new glory, you  may wish to raise a glass to the people who built it in the first place, if anything sums up the Lowerhouse tradition, the back story of the club room does, and it also shows that crowd funding is nothing new.

There have been countless times  in Lowerhouse CC’s  long history, when it seemed impossible for the club to survive.  When the renovated club room opens its doors for the 2021 season, it will be just 70 years since it was first constructed,  when club and community came together in a remarkable effort to re-build after disaster.

In the early hours of Monday 21st November 1949, Mrs. Riley of 22 Thornhill St., smelt smoke, looked out of her window and saw that the clubroom was on fire, the flames, fanned by a strong wind, lit up the whole ground.

By the time the fire brigade reached the Lane Ends, “flames were shooting from the clubroom roof and windows.”  The building was completely destroyed , only “the walls, covered with asbestos two years  ago, were left standing although badly scorched.” The Express printed just one very dark photo of the damage.

There is a picture of the ex WW1 army hut, in our History Books when it was opened as a tea room in  April 1921.  It possibly came, directly or indirectly, from the disposal by auction of  Raikeswood Camp, Skipton, by the Ministry of  Munitions in June 1920.  It would originally have housed Yorkshire soldiers during their training, and later German POWs.

The hut served as tea room, social club, and committee room until a new tea room was erected in 1926, when its primary function became a  members’ social club.

The cause of the 1949 blaze, thought to have started in the bar, was a mystery, as no-one had been in since Saturday night when the steward locked up, (the club didn’t open on Sundays), the boiler wasn’t lit, and the electricity was turned off.   “To the surprise of officials, one survivor of the fire was a brand new cricket ball, unscathed and still wrapped in its protective paper.  Several dozen new balls however were destroyed or damaged.  Also untouched by the inferno was a pack of playing cards lying on one of the tables in the club room.” Club records all went up in smoke. Damage was estimated at £4,000, with only limited insurance cover, the building, being wooden, was uninsurable.

Years later Don Smith the sports writer at the Burnley Express recalled: “I was given a flame-singed page of an accounts book a day or two later, when the charred and sodden wreckage seemed to typify the ruin of the hopes of those who had kept Lowerhouse in existence from 1939-45.”

However, the club soon found that they had plenty of friends. Within 24 hours, they were inundated with offers of help and a reconstruction appeal was launched, with a target of £5,000. The Lowerhouse  ladies, well used to fund-raising, immediately formed a committee and set to work.

The 1949 AGM took place as already planned on Tuesday 6th December, at the Canteen.

1949 had been a sunny, record breaking summer of cricket.  Everton Weekes hit the  highest ever individual League score of 195 for Bacup against Enfield, attendances were up and 12 of the League clubs showed a profit.  Lowerhouse was not one of them.  The  report and accounts, pre fire, showed  a loss of about £100 for the season, due to the cost of a new entrance and pay box, and disappointing social club takings.  “It has to be  admitted that the Social Club Sub-committee has not been too happy this season”.  The Secretary also felt that spectator attendance was not helped by Lowerhouse’s home fixtures clashing with Burnley FC home games, “The staging of a football practice game, at 3.15 p.m. on another occasion of a home fixture caused bitter comment at Lowerhouse.”

On a brighter note Lowerhouse won the inaugural  “A” Team competition, with Colin and Fred Martindale featuring strongly.  Here are the lads receiving the trophy in August, 1949, with  the doomed hut in the background. 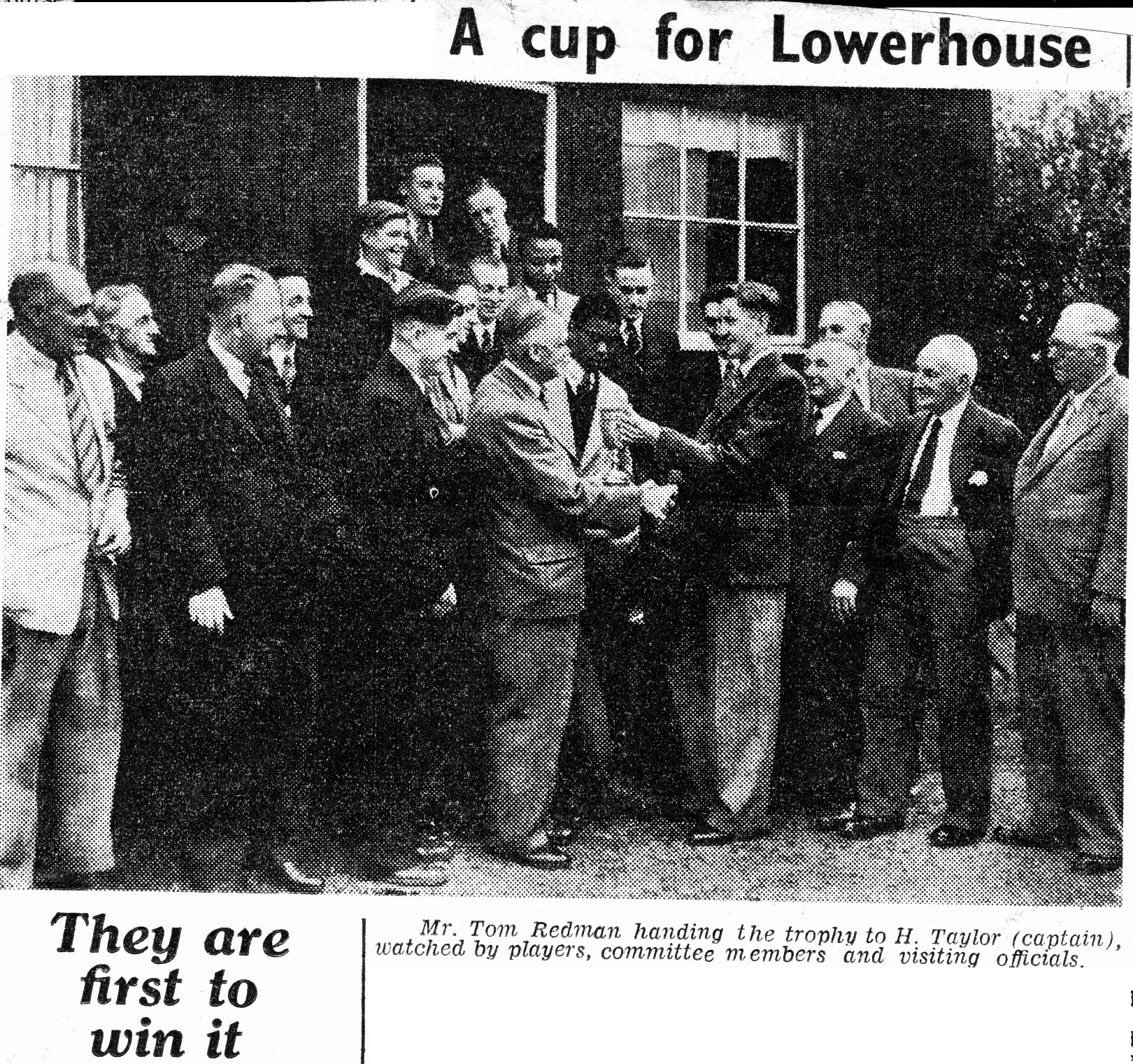 Tom Redman, (of the Redman grocery chain), the club’s local President, issued a stirring appeal at the AGM: “We are not going cap in hand to the League or to the clubs for assistance. We will do this job ourselves, but it needs months of hard work and we must have the support of the members. The disaster might be a blessing in disguise as it might help recapture the team spirit, enthusiasm and harmonious work which had been so important in bringing the club through former trying times.”

Pro Manny Martindale urged the players ” to do their utmost to work as a team and help make a club of which they all would be proud.”

By January, £1000 had already been raised. The club published regular acknowledgements in the Express of all funds received, no matter how small, initially every couple of weeks, but then less often, as the flow of money slowed down.

It is important to note that the majority of donations were small sums from private individuals, but there was also much support from the wider community. The lists of donations are too extensive to reprint here but here are a few examples :

Teachers from several local schools donated, and in the case of Rosegrove Secondary Modern School, the boys contributed too.

Tom Redman had said he would not ask cricket clubs to help, and not many seem to have offered. at least not according to the published lists: Todmorden supporters club gave £10, Burnley CC did likewise, and  their pro Cec Pepper added  £5 of his own. “Umpire, East. Lancs” gave 5 shillings.

The Lowerhouse players also did their bit, raising £100 in January,  and also organising a dance  in February: 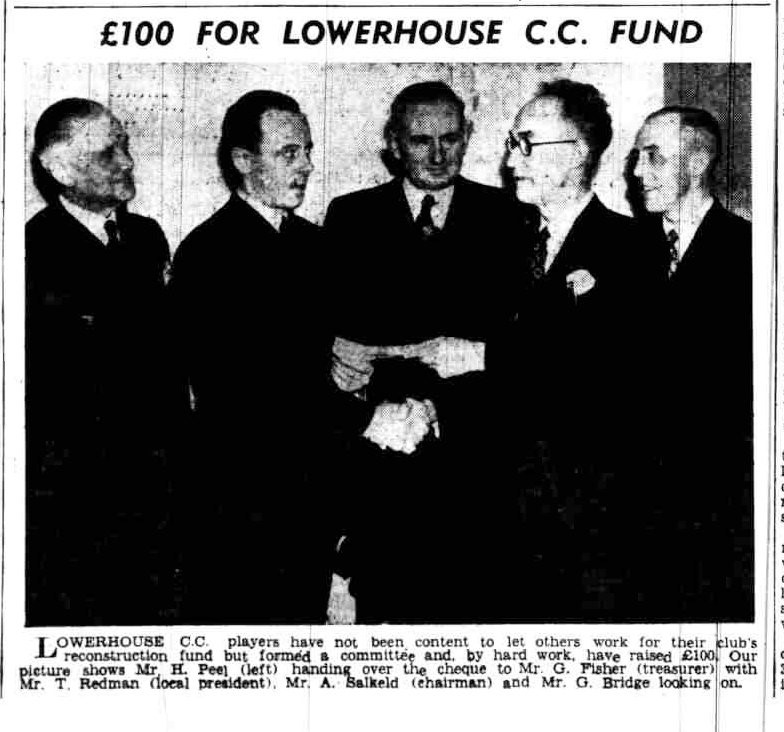 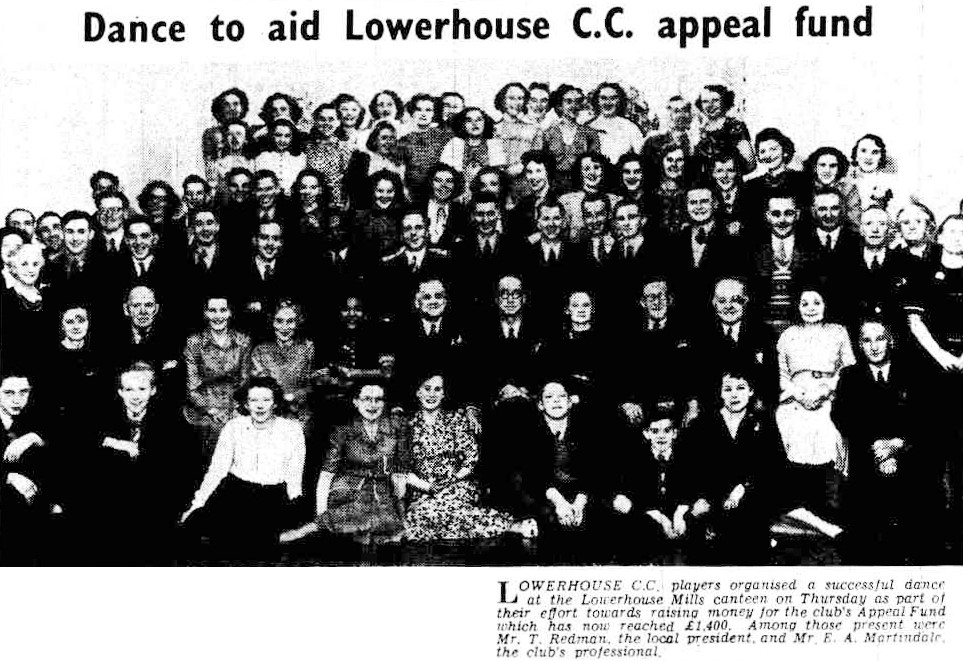 The Ladies Committee were by agreement the stars of the fundraising appeal. When it closed in September 1951, they  had raised  £414, and some ladies did their own individual “efforts” as well. They also purchased a piano for the club room.  They were given well deserved praise in the 1951 AGM report and a special mention in the balance sheet: 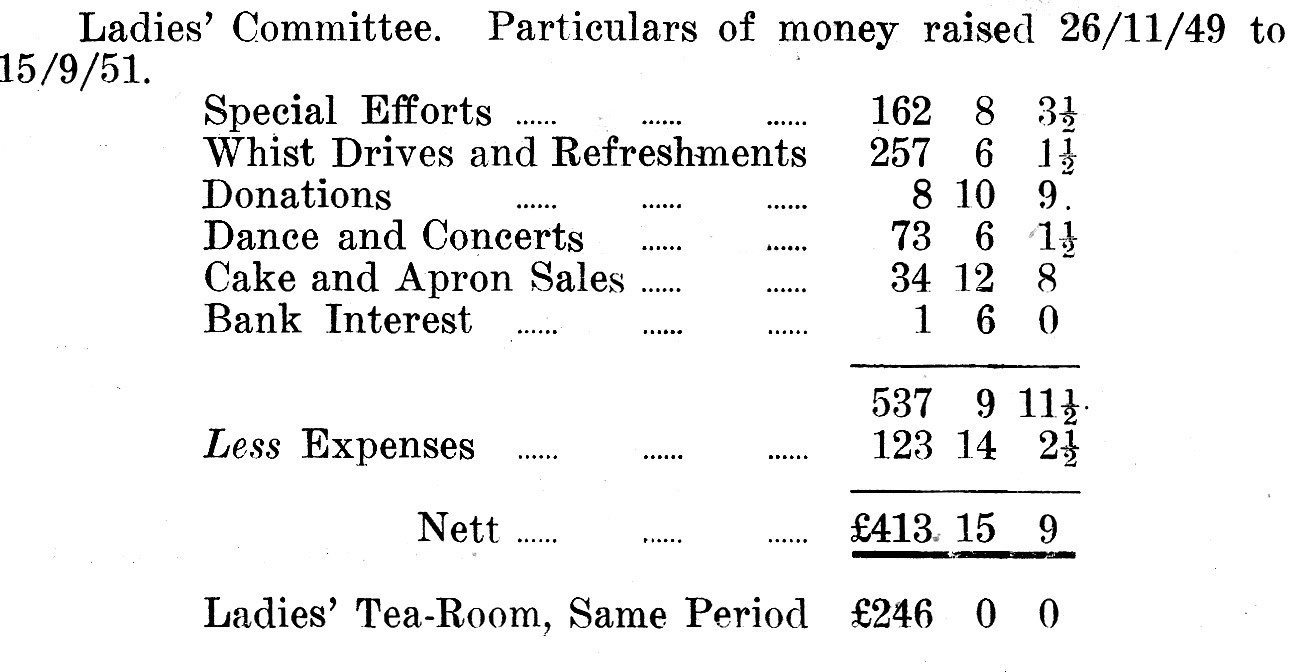 By the 1950 season AGM, there was about £1800 in the appeal fund. 1950 was described as the club’s “worst within living memory” and “one long struggle against adversity”. The summer had been dreadfully wet, spectator numbers crashed, and of course they had no club room to generate income.  They recorded a loss for the season of £437.  The first team didn’t win a game until August, when they won three, finishing third from bottom.

However, looking to a brighter future, 1951 would see the Festival of Britain with lots of local celebrations, the new club room would be ready for the start of the 1951 season, and with Manny Martindale leaving to play for Keighley, they had taken the bold move of signing an exciting young West Indian, Roy Marshall.

Rising from the Ashes

Details of the rebuilding are scanty, but  the club room was indeed ready for the 1951 season. They did as much work as possible themselves, and after spending the reconstruction  fund, and the insurance money, they had a shortfall of around £900.

They don’t seem to have had a grand re-opening.  The opening fixture of the season on 13th April 1951 should have seen them at home v Todmorden, but for the first time ever the league season was postponed by a week, due to many grounds being unfit,  particularly Ramsbottom which had not recovered from being flooded in September.  However, Lowerhouse had already been allowed to play that  match on Whit Monday 14th May instead, when a good crowd could be expected, so perhaps that was the official opening. The match report described the new club as an imposing building and the League Chairman was there to show his approval. Unfortunately, the young West Indian star, Roy Marshall, had succumbed to the cold, damp climate, and  was suffering from a heavy cold which had nearly turned to pneumonia, and couldn’t play.

The new building was described in the 1951 AGM report as splendid and a great asset, enabling them to offer better facilities to all the members during the winter months.

With hindsight, perhaps Tom Redman was right, the fire probably was a blessing in disguise, as the old hut would have needed replacing sooner or later, and although at the time  it felt like a total disaster, coming when the club was still trying to recover from the war years, perhaps it did help to bring people together and reminded them that they wanted the club to survive.  The more modern club room probably also ensured the club’s financial survival, right  up to the present day.

“Those who bear the mantle of succession with feelings that today it can be a somewhat un-easy yoke, can take heart from the struggle which undoubtedly occurred in the past.  Some day there may be a bi-centenary and the happenings of today may be viewed with the critical gaze of those yet unborn.  It is a difficult stewardship – but it is a shining heritage for those  who follow the tradition.”

Sunday is the welcome return of the new look ASDA FOUNDATION PENNINE LANCASHIRE 10K There are a number of road closures in operation between 4.00am and… 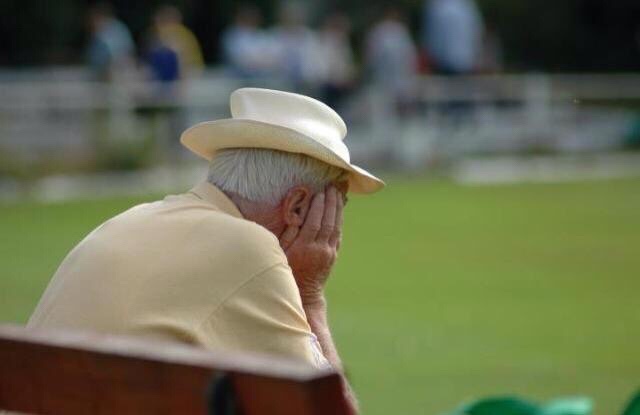 Today marks 5 years since the passing of Bomber. We remember him today, as always. ?

Lowerhouse Cricket Club are delighted to announce that Jason Krejza will be replacing Damien Wright as Lowerhouse professional for the 2009 season.   26 year-old…