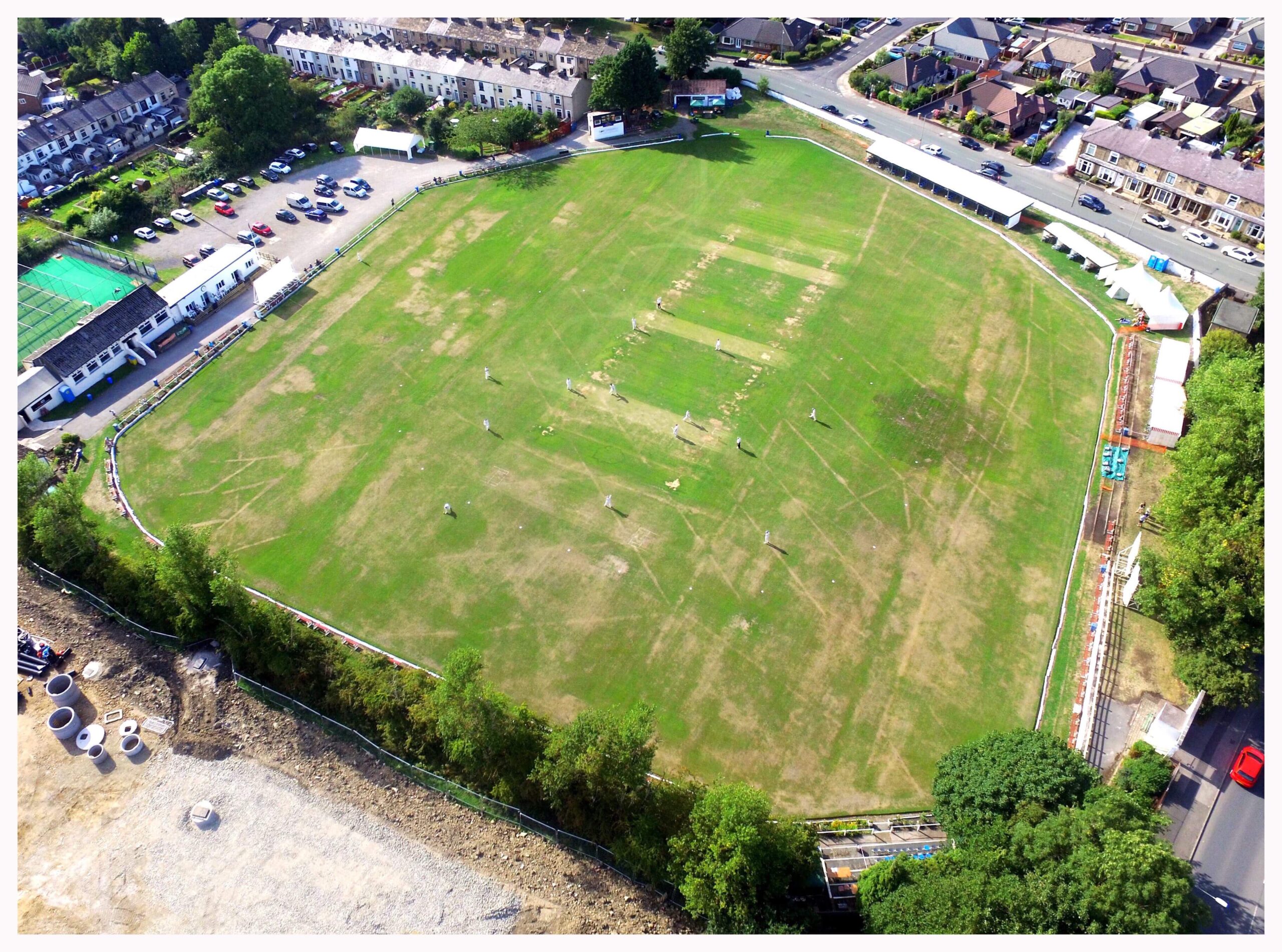 At Lowerhouse C.C. we are now in the no man’s land between seasons. Our Worsley and Holland Cup successes of 2018 are in the rear view mirror and our Ron Singleton Cup fixture against Walsden some way off.

I thought it would be good to find a topic that might cause an interesting debate in the off-season and have posed and tried to answer the question ‘who are Lowerhouse’s ten best proffessionals?’ in our long history, ever since Gibson Price first fulfilled that role in 1874. I’m sure players, ex-players , officials and fans will have widely differing opinions but here I’ll state mine. I just don’t know enough about the pre-1892 pros so none have been seriously considered. From 1892 until the First World War I haven’t found an exceptional one to begin my list but there are some honourable mentions.

My first selection for top ten status comes up just after the Great War and is BILLY COOK our pro’ from 1919 to 1922. He was one of 4 brothers who all made their mark on the game. His younger brother Lawrence got over 800 first class wickets for Lancashire. Although he too played for the County side, Billy decided to take the relatively rich pickings of League cricket and he became a legend in the Lancashire League. He was a big, robust fast bowler who took 1265 wickets for Burnley alone. He took 373 for Lowerhouse despite missing much of his first season. Needless to say the 130 he took in 1921 is the Club record.

Also in the 1920’s is my second selection in the Accrington born FRED WEBSTER. He was a promising amateur with his local team Church when in the mid-1920’s he got his chance with the County side. Unfortunately he couldn’t take it and only played two games. It wasn’t a lack of ability on his part but more that the Lancashire side of his era were stacked with talent. They won 4 out of 5 County Championships between 1926 and 1930. Even the famous Eddie Paynter had to serve a long apprenticeship before getting a regular place. In Webster’s 3 seasons at Lowerhouse he took 285 wickets with his left arm pace bowling and scored 1670 runs. In his first season the team reached a Cup semi-final and in his last they only lost 1 more game than Champs Nelson. Webster’s story ended tragically as he died in Burnley less than 2 years after his Lowerhouse stint was over.

I haven’t chosen anybody else for my top ten before the Second World War but honourable shout outs go to West Indian Edwin St Hill and the grizzled veterans Dick Tyldesley, Len Parkinson and Fred Root. In the immediate years after 1945 Lowerhouse employed two excellent West Indians as pro’. These were MANNY MARTINDALE and Roy Marshall. I felt I could only pick one and it was a close run thing in favour of the former. Martindale scored over 2000 runs for Lowerhouse but he’d got his 10 Test caps on the basis of his skilled fast bowling and he would take 307 wickets for the Club. Marshall is unlucky to miss out because his 969 runs in 1952 was a new record and in making over 35,000 first class runs, mainly for Hampshire, he scored more heavily than any other pro’ in ‘House history.

With mentions to Bill Holt, who led Lowerhouse to an unexpected fourth place in 1957, and that great Club servant(as pro’ and amateur) Jim Minhas, I shall post my fourth top tenner in BASIL BUTCHER. He scored over 3000 Test runs and was part of strong West Indian batting line-up that included the 3 W’s, Hunte, Kanhai, Nurse and Sobers. In the 1962 season, his only one at Lowerhouse, Butcher became the first player to get to 1000 plus for the Club.(1055) Lowerhouse, even by their often fairly lowly standards, had a lengthy barren spell until the fifth person on my list helped give new hope. This was MOHINDAR AMARNATH who was pro’ in the 1977,1978 1980 and 1981 seasons. ‘Jimmy’ as he was known played 69 Tests for India making 4378 runs with 11 centuries. He was a member of the Indian team that surprisingly prevented a hat-trick of West Indian victories in the World Cup of 1983. In 1984 he was a Wisden Cricketer of the Year. He scored 2660 runs for the ‘House and took 263 wickets with his gentle but effective medium pace bowling. He nearly always batted in a restrained way, thinking rightly that there wasn’t much chance for the team if he failed. Lowerhouse got to their first Cup final and achieved a top half finish for the first time in 20 years with Jimmy at the helm. A fine and responsible player! Lowerhouse came so very close to winning the League in 1982 and may have done so if skipper Alan Holden had used the Kiwi pro’ Evan Gray’s bowling a little more than he did. Gray took 69 wickets and scored over 500 League runs.

So we come to my sixth choice in Indian KIRTI AZAD. He was a completely different character to Amarnath. If the latter was Arsenal under George Graham then Kirti was Man City under Pep! He was pro’ between 1983 and ’85. The middle year saw him beat Butcher’s record for runs in a season with 1069 and in taking 72 wickets, had achieved one of the great all-round seasons in Lowerhouse C.C history. People will differ in which of Azad’s innings was their favourite and mine was his 104 not out versus Burnley. A commanding innings leading to a rare victory over the ‘old enemy’ in that era.

Not long to wait for number 7 on my list in the shape of Aussie TONY DODEMAIDE. He was a player of the highest character who toiled hard for his impressive 94 wickets. Not a natural batter but he always sold his wicket dearly and scored 570 runs. Manzoor Elahi was an excellent pro’ for the Club in 1988 and ’89 as was Shawn Flegler in 1995 and ’96. The latter scored 1800 runs and took 129 wickets over his 2 years and we’ll always remember his scampering between the wickets with his amateur partners struggling to keep up.

Is ‘honourable’ mention an oxymoron where 1997’s pro’ Corrie Jordaan’s concerned. Nevertheless Lowerhouse made a good fist of challenging for the League and Corrie’s slow bowling achieved 100 League wickets which hadn’t been done post-1945. We reach number 8 in Protea MARTIN VAN JAARSVELD . He was pro’ in 1999 and 2000. He scored 2144 runs and took 86 wickets for the team and set the batting record at 1265 runs. He became a stalwart of County cricket and had scored 52 first class hundreds at the time of his retirement. Personally I’ll always remember his extra cover drive that so often went in the direction of the old pavillion. I called this Van Jaarsveld corner but it didn’t quite catch on.

Not many pros had the batting talent of Jacques Rudolph in 2002. His 6 centuries(5 of which were consecutive) is a Club record. Nonetheless he only took a mere 7 wickets.

At No. 9 we have one of the Club’s greatest competitors in RYAN HARRIS. His 2 seasons were statistically good but not remarkable but the leadership qualities and the elevation of others makes him a worthy candidate. He scored 1255 runs and took 99 wickets for the Club and despite nagging injuries got 113 Test wickets for Australia. No ‘House pro’ as got a higher total. Many will remember Ryan’s opening partnership with Jonathan Finch versus Rawtenstall that set a new League record, with both participants getting centuries.

In 2004 Peter Fulton was the first ‘House pro’ to be on a silverware winning team. After a magnificently hot start his season petered out. Sorry about that pun! In 2005 Lowerhouse reached the promised land when winning the Lancashire League title after a mere 113 years of trying . Andrew McDonald was pro’ and of all the rejected candidates for my top ten; he was the one I agonised most about. He had a great skill set for 50 overs cricket and nobody was more effective as a ‘House pro’, certainly not since the likes of Gregory and Cook, at polishing off stubborn tailenders. In the end I just rejected him because in my Lowerhouse-centric world I felt in going off mid-season to play for an emerging Victoria side and then leaving early before the season’s end, he had endangered our League winning chances. He played 19 out of the 26 games.

The final player in my top ten is FRANCOIS HAASBROEK. Francois limited profile and fairly modest record in South African cricket was belied by his play and influence at our Club and he goes down as probably David Wren’s finest signing. Certainly his most shrewd. Frankie helped the team to an unexpected second League success in 2011 and the Club’s only ‘double’ in 2012. His batting average is up with the better pros, being above 40 and before his return to the Club in an amateur capacity in 2018, he had already got 200 plus wickets. He was an ideal pro’ to compliment the emerging youngsters of his era. Cobus Pienaar was pro’ when Lowerhouse won their fourth League in 2014. He took 68 valuable wickets that season but one felt that he underachieved somewhat in batting given his undoubted skills. In South African domestic circles I’m sure they’d be shocked that Haasbroek’s batting average in the Lancashire League is 10 runs above Pienaar’s. I’m afraid also I kind of blamed him for the defeat to Rawtenstall in the Worsley Cup semi when he had a poor outing. This robbed Lowerhouse of a possible second ‘double’ in 3 years and a home final versus Burnley. I remember thinking at the time “we’ll never have a chance of that happening ever again!”

Our current pro’ Ocki Erasmus is building up his own legacy and his remarkably consistent batting may see him make my list in time.

Want to send us in your top 10? Email adam@lowerhousecc.com  or list them on social media.

​Junior coaching The coaches meeting at the club on Tuesday December 13th. has been postponed due to a heating failure and will be rescheduled in the…

COUNTY ROUND UP Congratulations to wicket keeper batsman Hannah Till (14) who will represent Lancashire CCC Ladies this weekend. SENIOR RESULTS         …

Lowerhouse Cricket Club are sad to report the death of 2 former players from the 1950’s – Jack Salkeld and Leonard Drabble.  Our thoughts are… 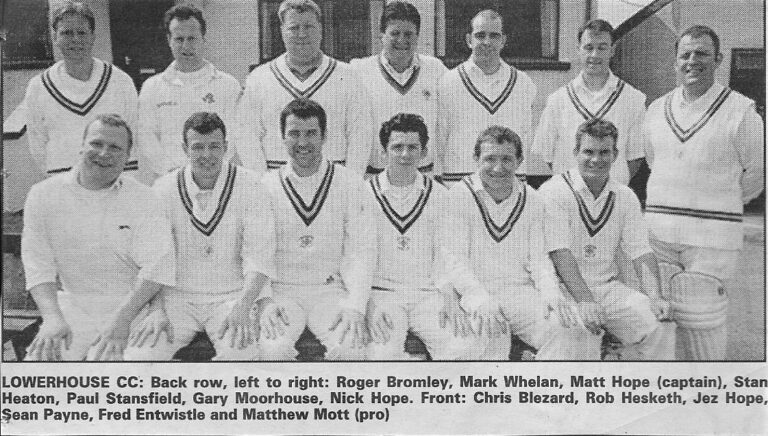 Some great finds have been sent in by Chris Bleazard from a scrapbook at his Mum and Dads.  Below is the 1998 team, with professional… 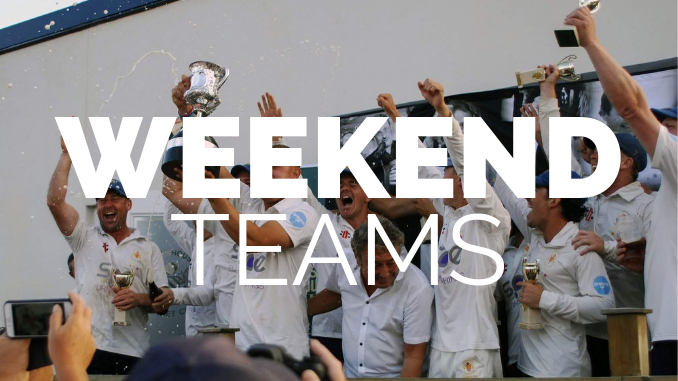 The weekend teams are as follows – please note Saturdays locations for the firsts and seconds have switched – posted earlier in the week: [one_half]Saturday…