This year, 2012, Lowerhouse Cricket Club will mark it’s 150th Anniversary. It’s fair to say that those 150 years have not been easy. Indeed, it is perhaps a miracle that we’ve made it this far!

Back in the day, the club was styled around the Habergham Garibaldians whose ground was situated near to the Griffin Hotel on today’s Rossendale Road. This is the current home of Alderson Horan Funeral Services.  The Lowerhouse team stayed there for about five years and were founded in their own right in 1862 and within a few years moved to the current site on Lowerhouse Lane. 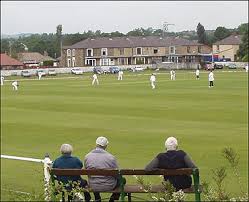 Over the years, the club has faced many difficulties and has on several occasions faced closure. Following the Great War and the suspension of cricket, a huge amount of money was required to re-commence league cricket at the ground and none was available. Eventually the Dugdale’s Lowerhouse Mill provided a loan that took many years and events to repay. In 1949, a blaze swept through the wooden structure clubhouse causing a total loss of the social facility and subsequent income.

The club has survived as a result of great work by many people during the past 150 years. It would be remiss as we celebrate the 150 years not to mention the likes of the late Jack Hayes, Jack Salkeld, Ken Smalley, Bill Fileding and Len Graham who served the club in various capacities and gave their all.  Similarly we should pay tribute to Joe Waterworth, Clifford Atherton, Pete Mawdsley, current Managing Director David Wren, secretary Frank Entwistle and treasurer Keith Fairclough all of whom have served the club for more than 2 decades in various capacities.

There are many legendary players past and some present, Wally Monk, Tom Shutt, Jack Stott, Phil Astin, Brian Higgin, Alan Holden, John Hartley, Steve Gee, Pankaj Tripathi, Matt Hope, Jez Hope, Chris Bleazard, and Charlie Cottam and of course, Stan Heaton who’s influence is as prominent today as it was when he was a player. The stars and names of today, Finch, Russell, Beneduce, Bailey, Whitehead, Martin, Hawke, Khan, Heap and Walker.

The ‘Cinderella’ club has now become a force in local league cricket and we can be very proud of our current achievements, status and role in the surrounding community.

Today, we don’t have the obvious tribulations as shown above but we do have sub-standard buildings and surroundings, the age and condition of which is a constant strain on funds and goodwill to continue their lifespan.

The Anniversary provides us with an opportunity to promote the club throughout the area to potential investors, sponsors and fund raising activity. To this end we intend to form an 1862 Committee with specific sub-committees to investigate every avenue to take advantage of this significant milestone.

Lowerhouse Cricket Club needs your input and participation, however large or small.

To play YOUR part and to help see this great club survive for another 150 years, contact any of the current directors or simply fill in the contact form below.